If I ever wind up on death row, I’ll get the best wood-fired traditional pizza ever as my last meal and hope the execution happens quickly before the celiac makes me wish it already had.

There are other gluten-free pizza options, and, let’s face it, I’m not interesting enough to do anything likely to get me a parking ticket, let alone sentenced to death row. So I need alternatives, people.

To consider the options:

When I first started this this gluten-free thing, I once made it through half a gluten-free pizza (brand unnamed) while unknowingly also eating the cardboard disk on the bottom. It tasted exactly like the crust. It added some wood fiber to an otherwise diabetes-inducing combination.

Cauliflower-crust pizza. Well, it’s pizza toppings on cauliflower, and there’s nothing wrong with that. I have tried to make it more like a cohesive crust by blending the riced cauliflower with cream cheese, extra grated sharp cheese and parmesan, spices, a sprinkle of quinoa flakes, and whatever else I can think of to make it more sturdy.  It gets better, but I can’t stretch my imagination to get to pizza crust. Cauliflower doesn’t taste like rice either, but I still make pizza and rice with cauliflower because I happen to like cauliflower. All this pretend stuff tastes like cauliflower to me, and that’s OK.

Meat-za, crust made with ground meat,  is also pretty tasty — in the way of a good cheese steak. However, I’d prefer a burger, as well-done grass-fed meat can be a bit tough. Mantambre a la pizza, is pretty sublime, and even more cheese-steak-y, with an allowably bright pink center, as flank steak tastes like rubber bands if you don’t cook it really quickly or really slowly. A la pizza, though, not pizza.

Udi’s is standard against which all other gluten-free pizzas are judged and deservedly so. It’s usually the crust used by the big national chains for their gluten-free pizzas. For me, it’s an occasional indulgence, and sometimes acts as a bun. It is one of the few gluten-free product lines–the bread the crusts, the buns–that lasts through a meal without turning into crumbly, soggy yuk. When craving a thin, crisp crust, Udi’s can’t be beat. If a French-bread pizza is what you dream of, try a Schär baguette and go to town. Both brands are in my opinion, best-of-breed. But the carbs affect my blood sugar and undermine my ketosis.

Now a new pizza has appeared — perfectly in line with keto/primal eating. And it is good. In fact it so good it’s company is called. . . Real Good Foods.

They make pizza. The aren’t kidding about the ‘real good’ part.

The crust is a proprietary blend of chicken and parmesan cheese, all ingredients, non-GMO. The toppings, so far, come in three flavors: cheese, pepperoni, and supreme.

Check this infographic from the RealGood site:

My favorite frozen pizza, pre-celiac, was the Red Baron Deep Dish individual-sized pizza. This is about the same size with much more protein, and many fewer carbs. So, it’s 5″, but a HUGE 5″  packed with good calories.

The package directions are for a conventional oven or microwave. I made my first few, as recommended, in the oven @400F, baked on the board, on parchment, as shown above.

Although those ‘zas  got gobbled down with much appreciation, I prefer to have my pizzas cooler, and since the crust on these is mostly chicken, some meat juice came out, making things a bit wet.

So, I now bake them unwrapped, off the cardboard, on a rack over a half-sheet pan, for between 16-18 minutes. This way the crust gets drier, without being dry, chewy, like — dare, I say? a gluten crust — and allows the ultimate indulgence. Cold pizza. With what looks like grill marks on the bottom, as the shiny pan reflects the heat.

So how does this all work?

First, you must trust. Since Real Good is shipped from the middle of the US on dry ice in a styrofoam cooler, you must buy three cases at a minimum. That equals 18 pizzas in one pop. (Check around for coupon codes). I live on the east coast. If I order on a Monday, the cooler arrives Thursday. Perfectly frozen. In fact the dry ice is often still frozen a day later, even in the open cooler. Unhappy with anything? They have a money-back guarantee.

The more you buy, the cheaper they get.

So, I went all in for 6 cases on my second order (36 pizzas, if you’re paying attention to the math). The pizzas at that quantity are $4.25 per pizza. That’s about double the cost of a supermarket brand like Red Baron, and half of an Udi’s.

I often freshen up frozen food with fresh herbs, more fresh cheese, and so on. That’s what’s next on the menu for these beauties, and maybe a slightly hotter oven. 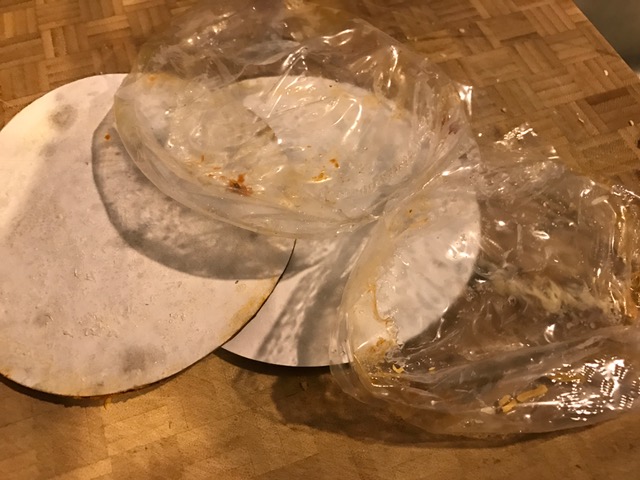 So far the cases don’t have mixed flavors — (hint)– my big freezer holds them all, my fridge freezer has room for six pizzas. So I have to pick one, or open three cases at a time.

Favorite so far? Supreme, because it has vegetables, sausage and pepperoni. Three-cheese a close second. Pepperoni for interest. Love them all. All have 25 grams of protein.

Pizza for breakfast, lunch and dinner today. Each worthy of a last meal.

But, heck, I got 33 pizzas left in the freezer. Looking forward to tomorrow. And the next, and the next . . . I plead innocence and a slight preoccupation with pizza.