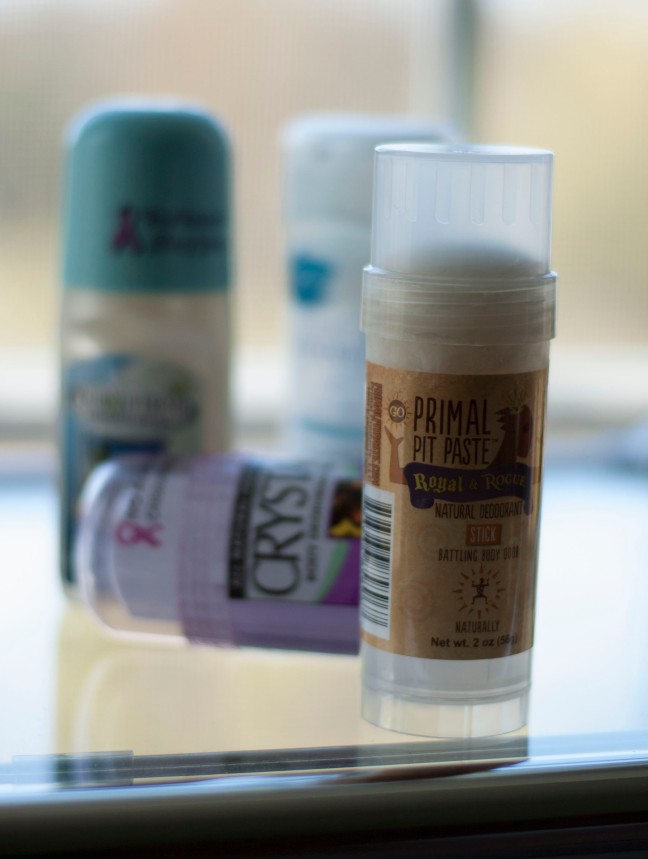 I’ m three years into a concerted search for a natural product to rival my favorite antiperspirant. That product  is “clinical strength,” marketed for women, and is pretty much like aluminum-siding  your underarms. You don’t sweat, you don’t smell, and you can even skip a few days like they say on the commercial. It’s pretty much my last holdout in the supermarket toiletries aisle.

I know this can’t be good for you. Particularly since it’s used close to lymph nodes, breasts, and other cancer-prone body parts. So, every once in a while I try to find something more natural.

Something that actually works.

I’ve tried about half a dozen.

An expensive alcohol spray from Germany smelled OK in the bottle but actually smelled worse than I did after wearing it for a day. That one went down the drain.

Crystals worked pretty well, but are slippery when you wet them.  I kept dropping them and getting a lot of unusable shatter.

Found a solid crystal in a “roll-on” type canister. about the same as the actual ‘crystal,’ but still smelly by day’s end.

Found a liquid crystal formula with scent. That was pretty good  except on the hottest days.

This brand: Primal Pit Paste in Royal and Rogue from Thrive Market. It comes in this roll-on type container (it is a waxy solid); other scents come either in a stick or in a small jar. I hate getting stuff under my fingernails, so I chose the stick. It’s a scent intended for men, but it has my favorite essential oil, frankincense, which also helps as an aromatherapy pain reliever. I’ll think of it as “Royal and Rouge” instead.

Here are the ingredients:

This is the ‘regular’ strength. You can get a stronger or lighter version in some scents (not this one) from the Primal Pit Paste website once you adjust to the product. If you have sensitive skin, you may want to start with the “light.”

Have been wearing it for about a month, when temps have ranged from 29 to 80 degrees. The arrowroot seems to help soak up perspiration, and the scent lasts all day.

So far, it works. Like all deodorants, you will still sweat, but the BO gets KO’d by the baking soda.

Summer has yet to arrive here in full force, but I’m happy there is a stronger version to try if this one fails during the swampy months to come.

Update, 12/16: I did try the strong versions of this brand over the summer. I got them in jars, and they were awesome. In the past eight months of using P3’s deodorants, something odd happened. My armpits turned black, sooty black. Then they gradually lightened to dark brown, and continued to fade.

A lifetime of aluminum deposits, detoxing and oxidizing? I really can’t explain it. Back to normal now, and still happy with P3’s products.