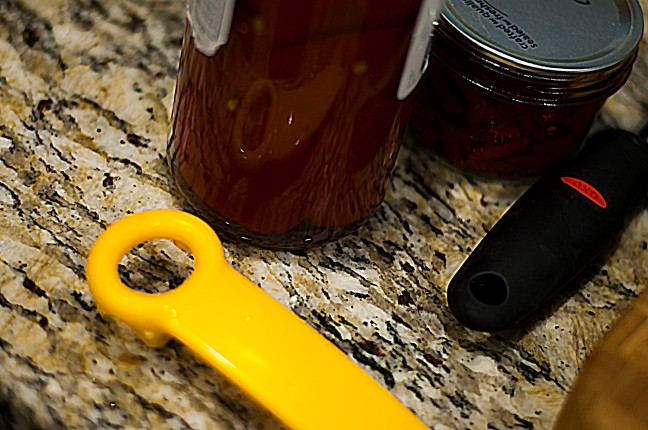 I remember as a kid the main screaming-point where the mother met the fridge was the fact that I didn’t screw on the jar lids tightly enough. Well, I expect the first few decades of that horrible behavior was laziness. Anything after about age 25 was probably MS.

These days, I can’t open some lids, and I struggle to close them. Small ones, like water bottles, I close and can’t open again. Hours of fun there.

Then The Kitchen came along with this simple fix.

It’s called a jar key, or some cute derivative thereof. It costs about $7. It works on the supermarket metal jar lids that have very few threads. For instance, a 24 oz jar of roasted red peppers. Straight-sided, wide lid. Spaghetti sauce jars. Olives. Pickles.

Honestly, those peppers have been in the pantry for about a year. I want to use them, I get them out, I put the lid in hot water, I tap them gently with a knife. I think about, but don’t, smash the bottle to get inside. Nothing happens. I put them back. I think they will be the oldest jarred red peppers in the world.

This jar key thing is pop-and-go. Almost zero effort. That size jar, wide, is particularly hard to get a grip on, so this thing is GREAT.

Highly recommended. I need to buy a new jar of peppers, at long last!