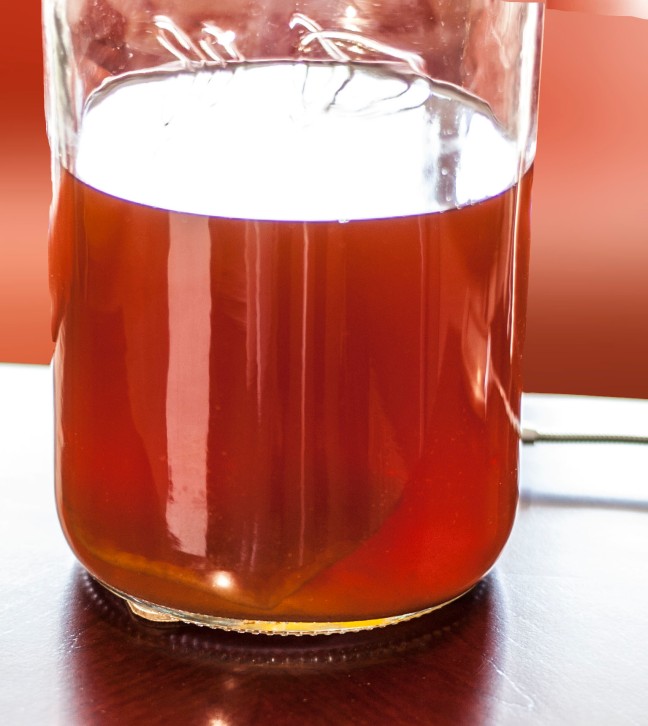 As some of you may remember I moved house in late December of last year. Moved between Christmas Eve and New Year’s Eve. Moved 2/10 of a mile to another unit in my same complex. One of the things I had to dismantle was this:

That monstrous-looking thing is a mature, healthy kombucha culture.

I didn’t want to risk spilling it, and I was in no shape to fret over it, so I split up the mother culture, called a SCOBY (symbiotic culture of bacteria and yeast) into layers, and gave it to my friends to nurture, before the packing frenzy began. I was thankful that I didn’t have to worry about moving such a precious thing in a time of high stress. (Yup, that’s the kind of values I have.) I was actually hoping to get a child of my SCOBY back again.

Repeat. I gave it to my friends. My friends. My lily-livered, yellow-bellied, chicken-shit friends, all of whom had at one point said “oh, I’d like to try kombucha!”

When they got their little mitts on my precious SCOBY, it was “gross.” It was “weird.” It was “scary.” It was “slimy,” It took too much, gasp!–white sugar!– to feed it.

(Kombucha is all those things and more. But it is a real challenge and achievement to get a good batch going. And it EATS sugar, you small-minded freaks. It eats sugar so you don’t have to.)

I think every one of the baby SCOBYs found their way into a garbage disposal. or a compost pile. At least I hope so. They would have had something to contribute to the municipal water supply in the brief moments before getting annihilated by chlorine. And I’m sure they’d do OK in compost. Maybe. Or, they might turn into leather. Dunno. Not going to try the experiment.

What did I get back? Pffft. Nothing. Still, if I had spilled a drop of that starter tea, I’d have had every fruit fly between Maine and Florida moving in with me. Even in the bleak midwinter. I don’t even want to know what sugar ants would make of that stuff.

So, I’m going to start over. Make a new beginning with a strange culture. I might make dresses out of the flowered curtains, Scarlett O’Hara-style. Oh, I don’t have any flowered curtains. Bummer. I do, however, have a new SCOBY.

In another post, I’m going to tell you how I do this for real. It’s not for the timid. It’s not for the messy. It’s not for the disorganized. It’s a small step between success and mold. However, it is, in fact a series of very tiny, do-able steps that, once accomplished, are not hard to master. Have courage, and be in the moment. Once you get started, it’s hard to screw it up.

As to those friends RE: kombucha? As Miss Scarlett said, “Great balls of fire. Don’t bother me anymore, and don’t call me sugar.”

With regard to non-kombucha-related things? Hmm.

OK,  I thought about it.

You’re not getting any kombucha though. Mine will rise again. Mine.

Now into a room-temperature, dark, still place for a week. Since this is my first batch with a new SCOBY (cheap supermarket tea, sugar, a splash of vinegar to ensure acidity, and whatever starter liquid came with the SCOBY, I’ll be throwing most of it away and starting fresh next week with starter tea (2 cups) saved from this batch, a much better quality of fresh tea, and my nascent SCOBY, along with the little starter SCOBY. This batch is going to be too acidic, but it will encourage the new culture to grow without unwanted mold or bad bacteria.

I also ditched the jar with the spigot in favor of a 1.5  gallon jar. It seemed like a good idea for an ongoing culture, draining off tea from the bottom, but the spigot was too hard to clean, and got clogged with kombucha yeast strands. After a good scrub, I use it now for other things.

More after the magic of kombucha takes place, I hope, in a week to ten days. The first one is always a gamble–but it seemed a lively little culture. Stay tuned.